Sad news this morning, 2 of the rescued battery hens in foster passed away. It is heartbreaking that they were so close to a wonderful life outside the cages but never had the chance to really enjoy it. Sometimes the stress of moving these hens is more than they can take and are not strong enough to make it through to a new life. We have had some lovely updates from people who took hens and how they are getting on. Many are already laying eggs, some have not been brave enough to venture outside their new houses and others are absolutely loving their new found freedom, like little chuckles who loves being outside and foraging in the muck. Hopefully it won't be long before her feathers fill out and she is looking better. 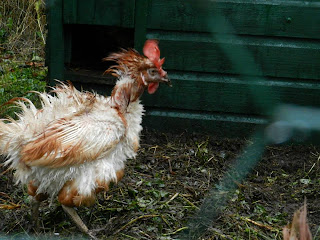 Today saw the arrival of a pup abandoned in Bohermeen. A beautiful female, possibly lab/German Shepard cross, who the finder thought was about 7 weeks old but after seeing her we think she is only 4 - 5 weeks. We don't believe her mother would have left her at this age which would indicate she has been dumped & left to die. Hard to believe anyone could be so cruel. We have named her Rosie. Rosie was far too young to stay in the kennels so she went into foster, where Eve the eldest of the resident German Shepherds has taken on the role of Mammy and is comforting this little girl. It is amazing the love animals can show for each other immediately after meeting, a lot can be learned from them. Our biggest fear now is there is more of her litter out there and they won't survive long on their own. It will be a while before this baby is ready to be rehomed.
When we receive an adoption application, the next step is to arrange a home visit. This is usually very informal, we get a good idea of how an animal will integrate into the families life and it gives us the chance to answer any questions a potential home might have. Home visits have been arranged for the week ahead. One took place today and they are able to offer a lovely home to one of our cats. We are so delighted they have chosen Francine, who has been in our care since January this year. Often the older cats get over-looked with so many kittens needing homes but they have so much love to give and there are huge benefits to adopting an older cat. We are thrilled for Francine and we hope she loves her new home. Good Luck Francine x

You may have read about the two bunnies also found dumped on the Bohermeen bog a couple of weeks ago. They were found separately and were so happy to be reunited, here is an update on their progress.

Bo and Canti, the Bog Bunnies, come inside.

Two weeks after their ordeal Bo and Canti are doing great. They are still tiny little things, probably still only babies at 12-16 weeks old. They have been happy in their sheltered hutch palace, but are fascinated with the house and the bunnies inside. So this weekend, their foster Mommy decided it was time to see how they would get on as house bunnies.

Introducing bunnies to a house environment is a great idea. They adapt really well to living indoors, and much to peoples surprise they are very very easy to litter train. They will naturally choose one corner to "do their business" and you can use a little tray, much the same as for a cat. They are curious and full of personality, and having a bunny in the house will allow them to get to know you and you them much more easily. Also, as rabbits are prey animals, having them regularly indoors will ensure that you can spot any signs of illness much more easily, as they tend to hide symptoms of sickness.

On Saturday night Bo and Canti were nestled beside their foster Mummy on the couch, happily cuddled together while she watched tv. They stayed in on Saturday night, and being such clever little bunnies, there was not one accident. Litter Tray Success! 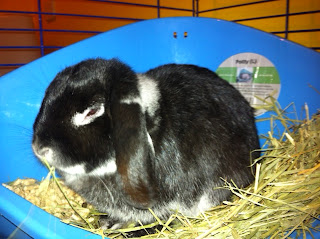 Sunday morning, Foster Mom decided to have a lazy morning, and since her own house bunnies were also lazing about on the landing, she took Bo and Canti indoors and up to bed for a snooze. They were fascinated by this and spent time on the bed chilling out together. They are too small to jump down but given their curiosity it wont be long before they are running the whole house - up and down the stairs. They have a little while to go yet, but are doing great. 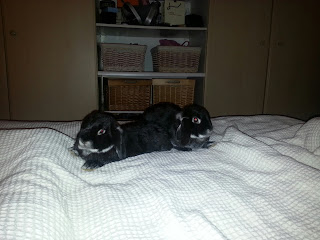 These 2 bunnies are a bundle of fun and would suit a home where they will be regularly interacted with. Preferably with access to a garden and secure run, and brought in at night time for fun and cuddles.
Posted by Last Hope at 01:22